For the second time, students of Fulda University of Applied Sciences participated in the European HomeParliaments - this time live on campus. Maria Keller and Zhylien Kaja organized the event and five students acted as moderators for the discussion groups.

European HomeParliaments are an initiative of the NGO “Pulse of Europe”, an independent citizens’ initiative founded in Frankfurt am Main in 2016. “Pulse of Europe” aims at making the idea of European Citizenship visible and audible, and at strengthening the links between EU-politicians and ordinary citizens. A Home Parliament is a private discussion group of 4 to 8 people with the slogan ‘‘Have a say in the big issues!‘‘. It is moderated by a host, who can either invite their friends  or have themselves assigned to an interesting discussion group. It all takes place either online via Video-HomeParliament, WebEx, Zoom etc. or in a face-to-face meeting.

The students - who got divided into three groups - had some lively discussions about the questions. Most of them agreed on questions 1 and 2 but disagreed on the third question. We are now keen to see what the overall results of the HomeParliaments will show and especially what the EU politicians will make of the results.

MEP Engin Eroglu virtually visited Fulda University of Applied Sciences and talked in the class "Introduction to European Integration". He answered questions of students of Intercultural Communication and European Studies and Human Rights Studies in Politics, Law and Society. The lively discussion covered topics of EU-politics, finance and economy, migration, Mr. Eroglu's CV and way into the European Parliament and many more.

We thank Engin Eroglu for taking the time to come visit us and hope to meet him again to further discuss European topics. 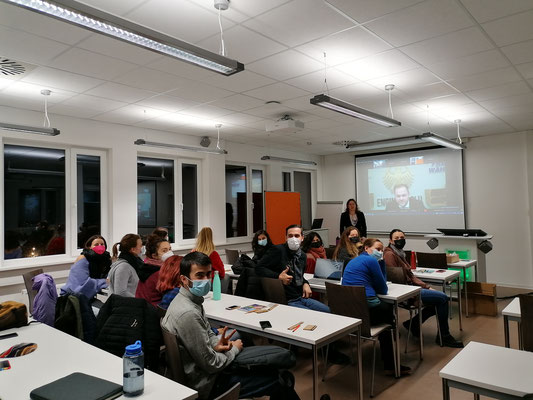 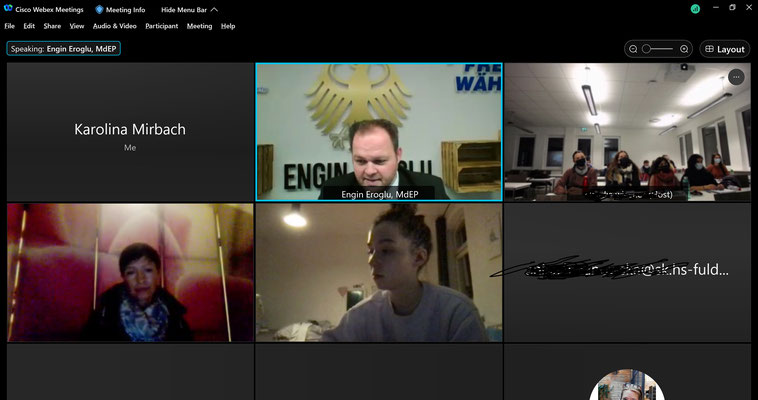 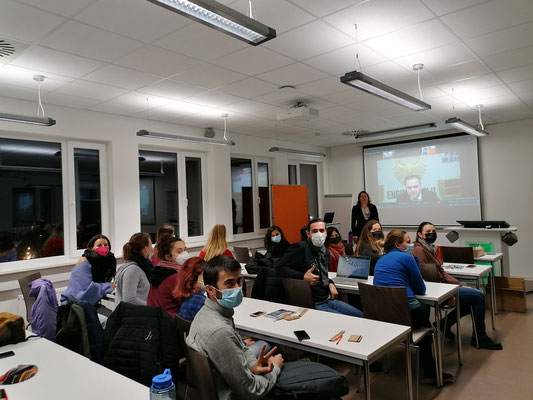 More information on the lecture series

We warmly invite all interested students of the Fulda University of Applied you to participate in the Global Model European Union (GLOBALMEU).

GLOBALMEU is the simulation of a European Council Meeting in Brussels with students from other European and non-European universities. Students will play the roles of member statedelegations, heads of governments or ministers, European Commissioners
or members of the press.

Apart from the students' own preparation, there will be a 1-2 hours preparatory meeting in advance.

The participation at GLOBALMEU will be online.
The event can be attended as additional element of the Europazertifikat. All participants will also receive a certificate of attendance.
If you are interested or have any further questions, please contact:
Maria Keller: maria.keller@sk.hs-fulda.de

On Monday, 20th of September 2021, everyone interested was welcome to hear more about the positions of the Fulda constituency candidates for the German federal election on September 26th. The discussion took place on site campus of Fulda University of Applied Sciences and was broadcasted via live stream. Prof. Dr. Claudia Wiesner moderated the discussion which was organised by Maria Keller and Stefan Rascher. On the podium, Nuha Sharif-Ali (Left), Gianina Zimmermann (Greens), Mario Klotzsche (who replaced Jürgen Lenders, FDP), Birgit Kömpel (SPD), Dagmar Heil (VOLT) and Michael Brand (CDU) debated numerous topics ranging from human rights and foreign policy to digitalisation and housing shortages.

University President Prof. Dr. Karim Khakzar welcomed about 50 guests that were present on campus and about 120 viewers who followed the event via the live stream, giving a short speech. He called for better framework conditions and higher funding for universities of applied sciences from both the federal states as well as the federal government. Then the floor was opened for the discussion among the constituency candidates. They presented their positions in several blocks of questions. The subjects covered included: Fulda and the region, social affairs and business, human rights, democracy, education and research. The panellists had a good two hours to express their views on each topic in short statements and to explain their own ideas and solutions. Before the event, everyone interested had been invited to submit questions – which were then included into the discussion – via an online tool and social media. In addition, the audience had the possibility to ask further questions.

One guest asked which actions the panellists were planning against the increasing radicalisation in society and the social division between urban and rural areas. All panellists agreed on democracy and social cohesion to begin with individuals and their attitudes. In addition, numerous initiatives in the city and region of Fulda aim at strengthening democracy. The question of raising the German minimum wage was a topic that was controversely discussed. The cadidates expressed notable differences in their positions. While the representatives of SPD, Greens, Left and Volt advocated for a fixed minimum wage and a rise to 12 € or 13 €, the representatives of the CDU and FDP argued for a regulation of wages based on collective bargaining. Migration and refugee policy were also discussed intensively. Regarding the latter, Birgit Kömpel (SPD) emphasised that she would welcome Fulda to become a safe haven, and she was going to campaign for the admission of a certain contingent of refugees. The establishment of municipalities as safe havens was also supported by Gianina Zimmermann (Greens), who at the same time called for an immigration law. Mario Klotzsche (FDP) emphasised the need for an EU-wide consensus and the strengthening of legal migration. Similarly, Dagmar Heil (VOLT) pointed out the importance of a European approach and the necessary reform of the Dublin Agreement, as well as the shortage of skilled workers and the positive effects of immigration in this respect. Nuha Sharif-Ali (Left) demanded not to wait for a European solution and make a local decision, and she claimed the need to fight the causes of migration. Michael Brand (CDU) described the difficulties of fighting these causes and advocated the establishment of protection zones under UN control in the countries of origin.

"This discussion round illustrates a core of what democracy is and should be – an open, free and fair debate," said Prof. Dr. Claudia Wiesner. The discussion event was part of the “Debating Democracy in Europe” series of her Jean Monnet Chair. It was also one of the first events organised by the recently established Fulda Centre for Transnational Governance directed by Prof. Wiesner and linked to the Centre for Intercultural and European Studies (CINTEUS). The aim of the Centre of Governance is to promote the exchange between academia and practice via discussion events, lectures and workshops in which international guests and practitioners are involved. In addition, students are regularly given the opportunity to participate in Model United Nations simulations.

The event can be rewatched here: Link (in German)

Under the direction of Prof. Dr Claudia Wiesner and Zhylien Kaja the Centre of Transnational Governance organized a European HomeParliament at Fulda University of Applied Sciences on June 22nd 2021.

European HomeParliaments are an initiative of the NGO “Pulse of Europe”, an independent citizens’ initiative founded in Frankfurt am Main in 2016. “Pulse of Europe” aims at making the idea of European Citizenship visible and audible, and at strengthening the links between EU-politicians and ordinary citizens.

A Home Parliament is a private discussion group of 4 to 8 people with the slogan ‘‘Have a say in the big issues!‘‘. It is moderated by a host, who can either invite his/her friends  or have him/herself assigned to an interesting discussion group. It all takes place either online via Video-HomeParliament, WebEx, Zoom etc. or in a face-to-face meeting.

The European HomeParliament at Fulda University of Applied Sciences offered students the opportunity to discuss the following question: ‘‘Soll die EU in zukünftigen pandemischen Krisen entschiedener europäische Interessen vertreten? / Should the EU represent European interests more decisively in future pandemic crises?‘‘ in a setting that incorporates parliamentary time frames and rules. They were divided into three discussion groups of 4 to 8 students and had about 2 hours to discuss three proposals on an issue of EU politics such as: the vaccine production in the future, the question of vaccine export, and unrestricted travel within the European Union after vaccination.

The results of the discussions are uploaded to the European Home Parliament’s platform (you can find it here), where the results of all European house parliaments are collected. The results reach top EU politicians such as Ursula von der Leyen (the President of the European Commission); Othmar Karas (EVP); Manfred Weber (EVP); Pedro Marques (S&D); Helmut Scholz (GUE/NGL); Gabriele Bischoff (S&D) etc., who are looking forward to exchanging ideas with citizens, students etc. These politicians have agreed to take the findings into account in their deliberations and then give feedback in webinars, video statements or in writing as Ursula von der Leyen did. You can find the video here.

Pulse of Europe will also present the results of the European HomeParliaments at the Conference on the Future of Europe.